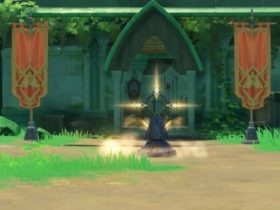 Many creatures roam around the islands of Fjordur, the new world map for ARK: Survival Evolved (although you may have encountered most of them in previous updates). However, there are five new and unique creatures in Fjordur that are exclusive to this DLC.

This guide will provide you with all of Fjordur’s unique creature locations in ARK: Survival Evolved, including their exact coordinates and how to tame them all. 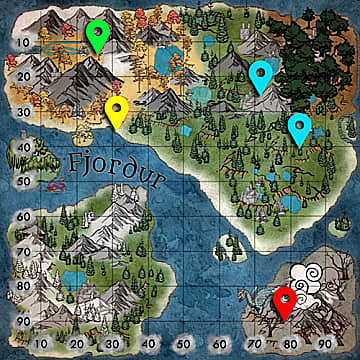 This boar-like creature is extremely fast and maneuverable, but only mildly aggressive, meaning it won’t take too long to tame. Andrewsarchus also doesn’t require a saddle, which is a plus.

You can find it in the area between the two blue markers shown on the map above, known as Broken Meadows.

To tame Andrewsarchus, you need to sneak up on it, throw honey in front of it, and let them eat it. While he is eating, jump on his back and follow the arrows that appear on the screen. If you kill Andrewsarchus, he will drop raw meat and hide.

The Aberrant Megalania Lizard can be found near the hidden cave, indicated by the yellow marker on the map above.

Aberrant Megalania is wilder and more unpredictable than its regular counterpart, but the taming process is much the same. Enter the hidden cave and start looking at the ceiling; this is where most of these lizards hide. Then use a harpoon weapon with a taut net to try to capture them.

Then use extraordinary kibble or kibble to feed them and ultimately tame them. If you kill such a lizard, it can drop a toxin in addition to its skin and meat.

If you manage to reach the island of Balheimr in the southeastern part of the Fjordur map, you will then have a chance to catch and tame a giant bat, known as Desmodus. These creatures nest inside a massive cave in Balheimr’s Pit, indicated by the red marker on the map above.

What makes Desomodus really special is his ability to produce Blood Elixir, a potion that increases your chance of taming any creature by 30%. You can read more about taming Desmodus and making blood elixir in our dedicated guide.

This giant mountain bird is truly priceless; it can help players recover lost items after death, which can be a real lifesaver during PvE and especially PvP matches.

These birds usually nest in the Snaerheimr Mountains and the Skadifjord area in the northwestern part of the map, indicated by the green marker on the map.

In order to tame Fjordhawk, players must kill a nearby creature and allow the bird to eat its flesh. The more meat he eats, the faster he will be tamed. Once tamed, this creature will be able to bring your items back to the new spawn location.

The Fenrir wolf creature has no designated location on the map, but you can unlock it by defeating the six Fjordur mini-bosses, which can be found at the following coordinates:

Once all of these island bosses have been defeated, you need to bring all of the creatures’ heads to the runestones, and Fenrir will be summoned, culminating in the Fenrisúlfr boss fight. At the end, Fenrisúlfr will drop a Cryopod containing Fenrir, which is basically a tamed Fenrir that can be summoned at any time if you need it.