The Genshin Impact Vulture Volans Chapter Act I – The Illusions of the Mob is Alhaitham’s story quest, which focuses on investigating the forbidden research surrounding the Hivemind. In the second segment called Pride and Prejudice, you have to enter the secret cave of Apam Woods, where the hive is hidden deep within you. Follow us to solve all the puzzles and collect all the unique domain chests.

How to Unlock Alhaitham Story Quest in Genshin Impact

To unlock Vulture Volans Chapter Act I – The Illusions of the Mob, you must first complete the Archon Quest Chapter III: Act V – Akasha Pulses, the Kalpa Flame Rises. Once done, head to the quests menu, then click on Story Quests at the bottom left of the screen. You need to spend a story key to unlock the Alhaitham chapter.

While playing the Alhaitham story quest, you will be prompted to enter the Secret Cavern area in Apam Woods. Before entering, please prepare a battle-ready team as you will need to defeat some opponents inside. And once inside, dive down and follow the quest marker to start the first cutscene/dialogue.

Enter the heart of the research base Once done, you will be prompted to head into the heart of the research base. Start by following the quest marker to the next house in front of you. This will trigger a fragment of Ilyas’ memory. 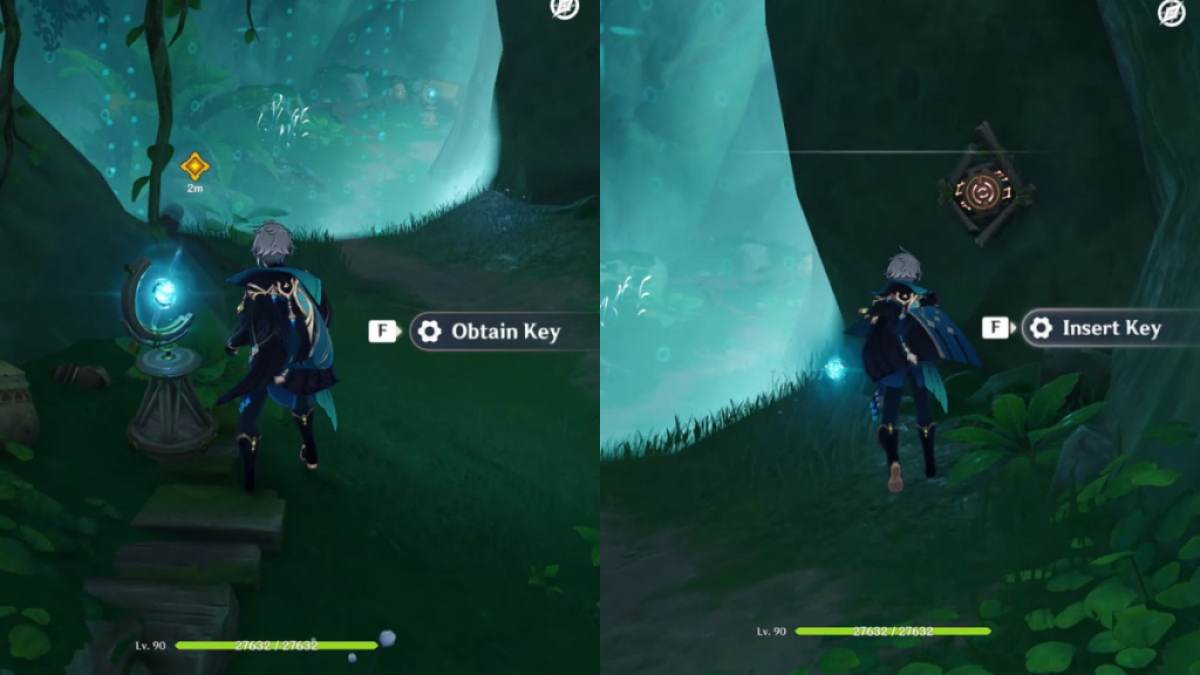 The game will present you with a key puzzle. You need to interact with the glowing blue orb on the monument to get the key, then interact with the red padlock on the wall to insert it. This will cause the barrier to disappear, allowing you to go further inside. 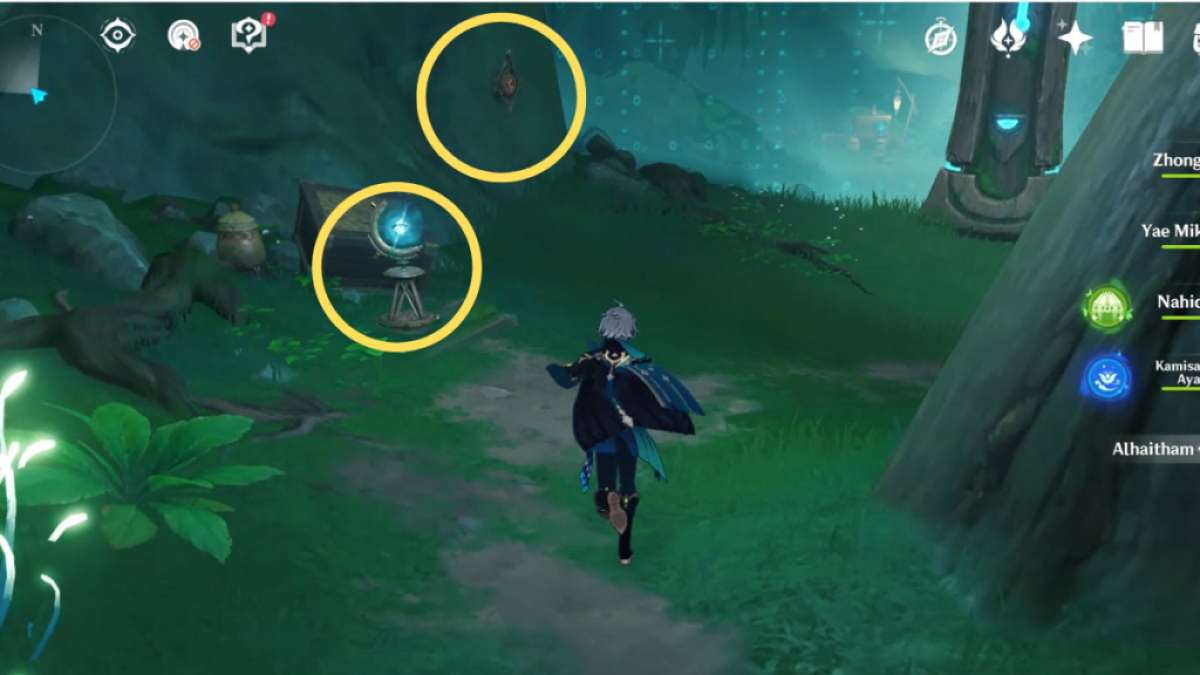 The next part is a bit tricky, as you have to go back and forth between the keys. First, pick up the key and insert it into the lock on the left to remove the left side of the barrier. 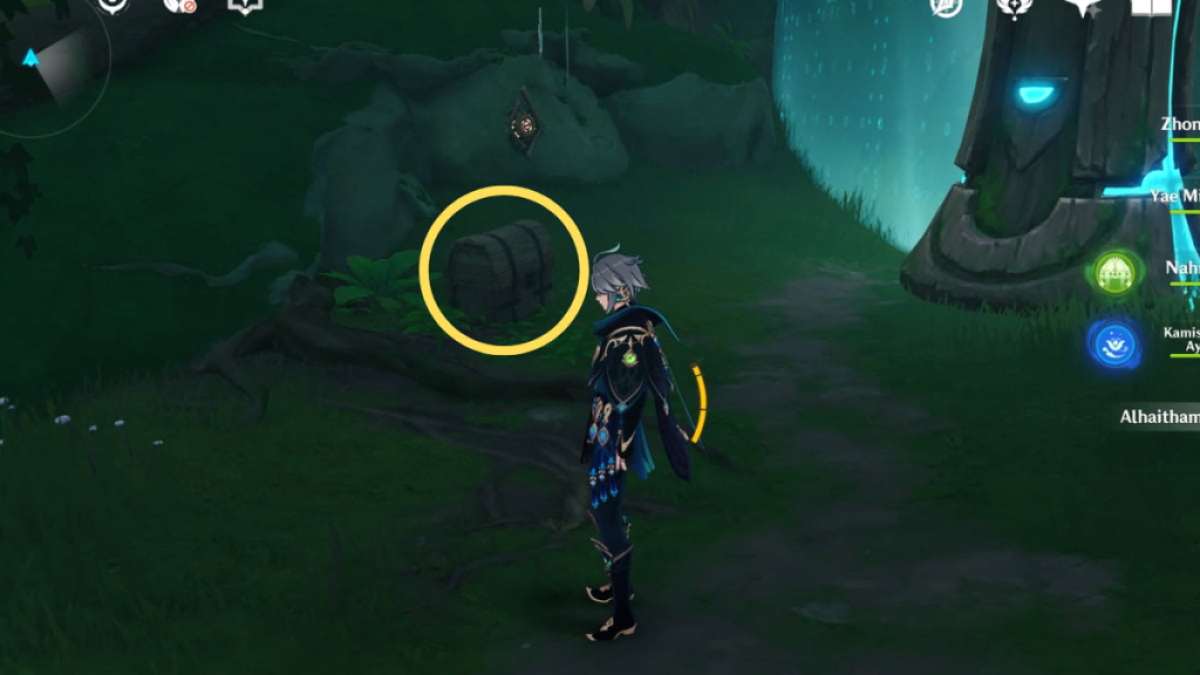 Enter from the left, then turn right to loot a common chest. You cannot recover it after leaving the domain, so be sure to loot it immediately. 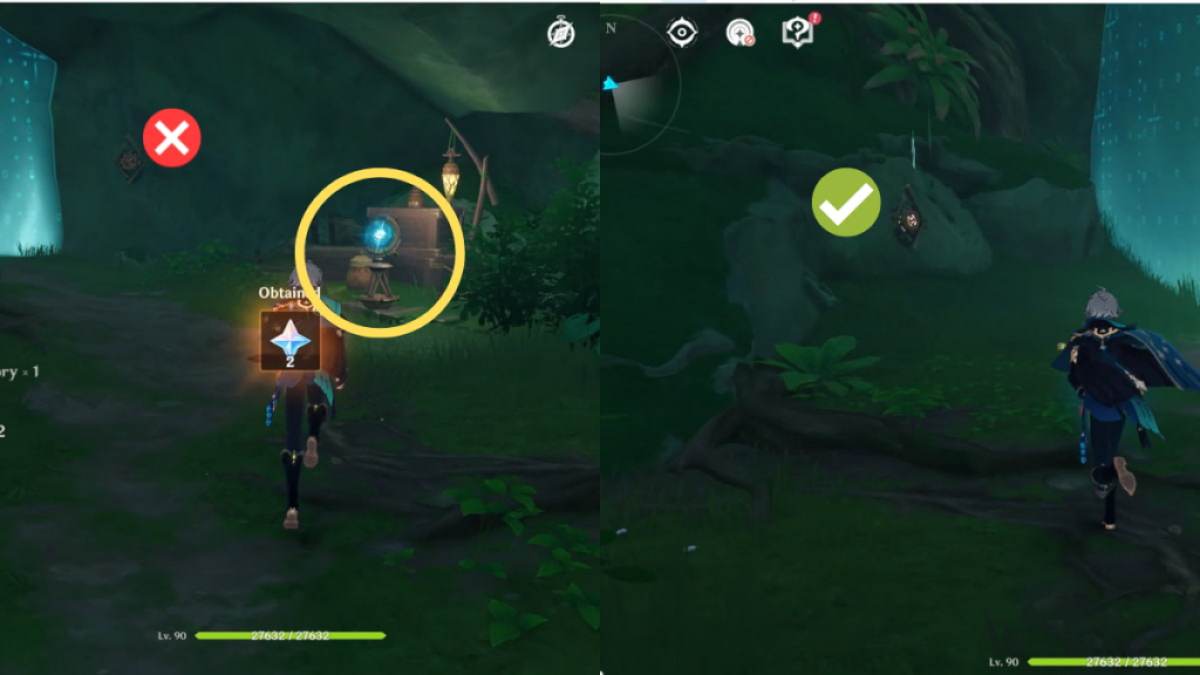 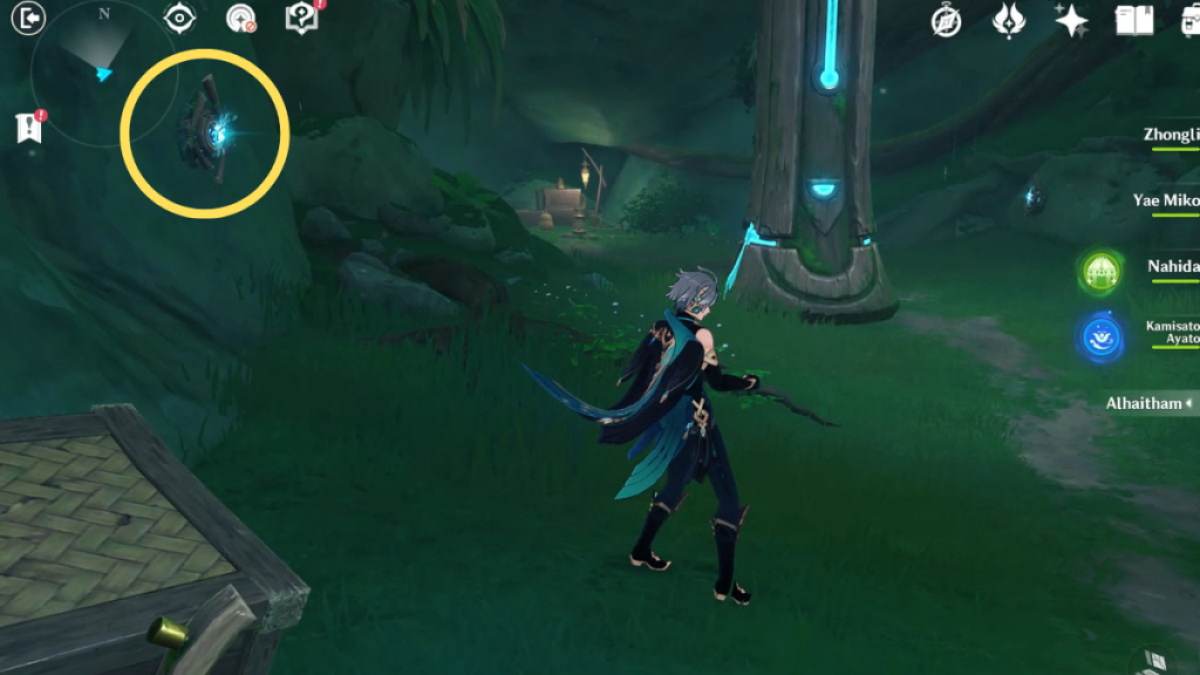 Both sides of the barrier should now be scattered. From the outside, your game should look like the image above. You need to interact with the key on the lock outside (circled above) to remove it. This will force the barrier to reform. 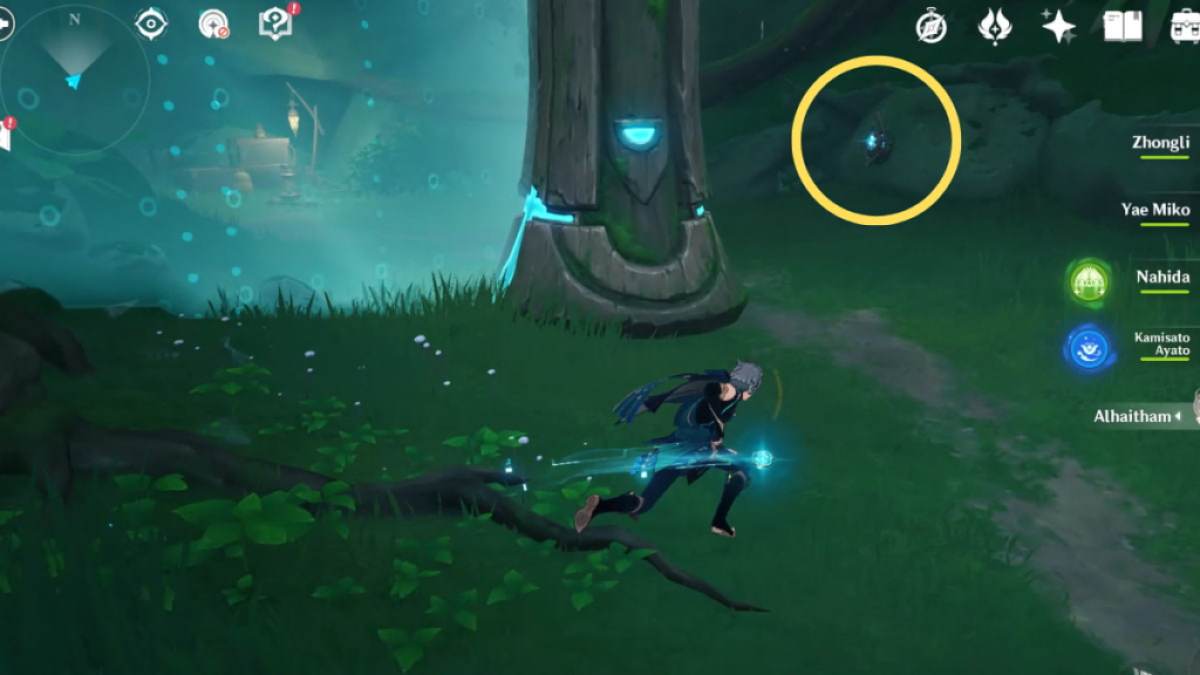 This time enter from the right side and then remove the key that we placed previously. The barrier will reform. You should be holding two keys at this point. 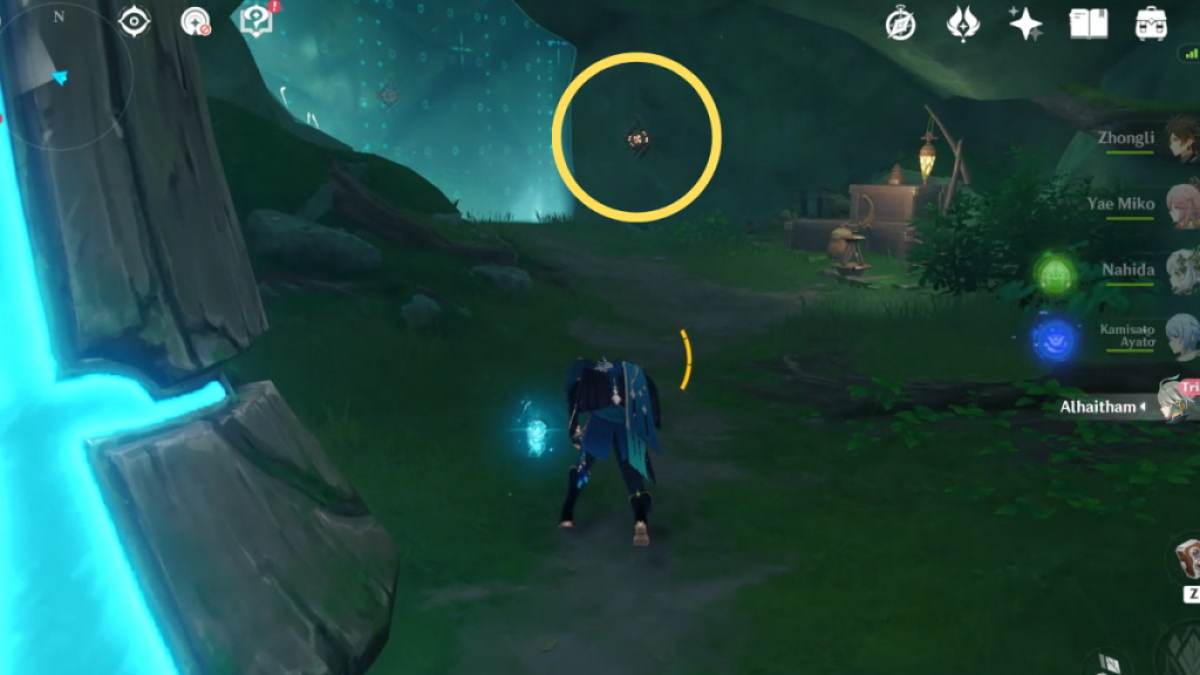 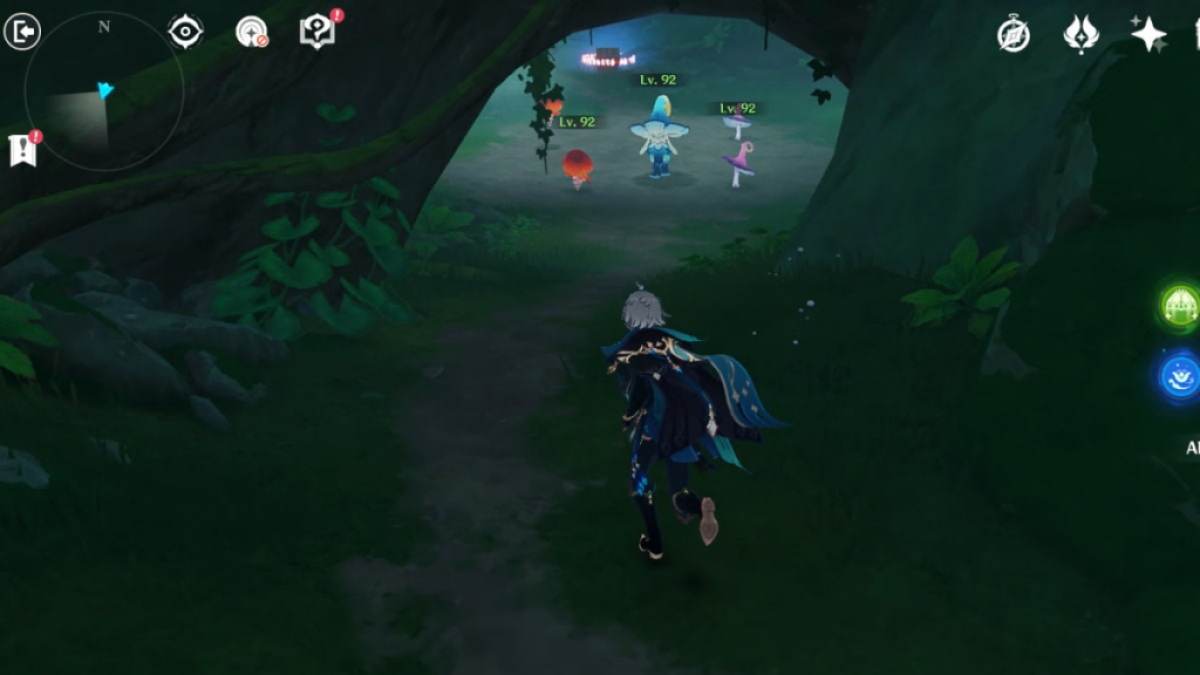 There is a small enemy encampment ahead. Defeat them to unlock the Exquisite Chest. Don’t forget to loot it, as you won’t be able to do so after leaving the domain. Once done, follow the quest marker and keep going until you find a bright area with a platform waiting for you. 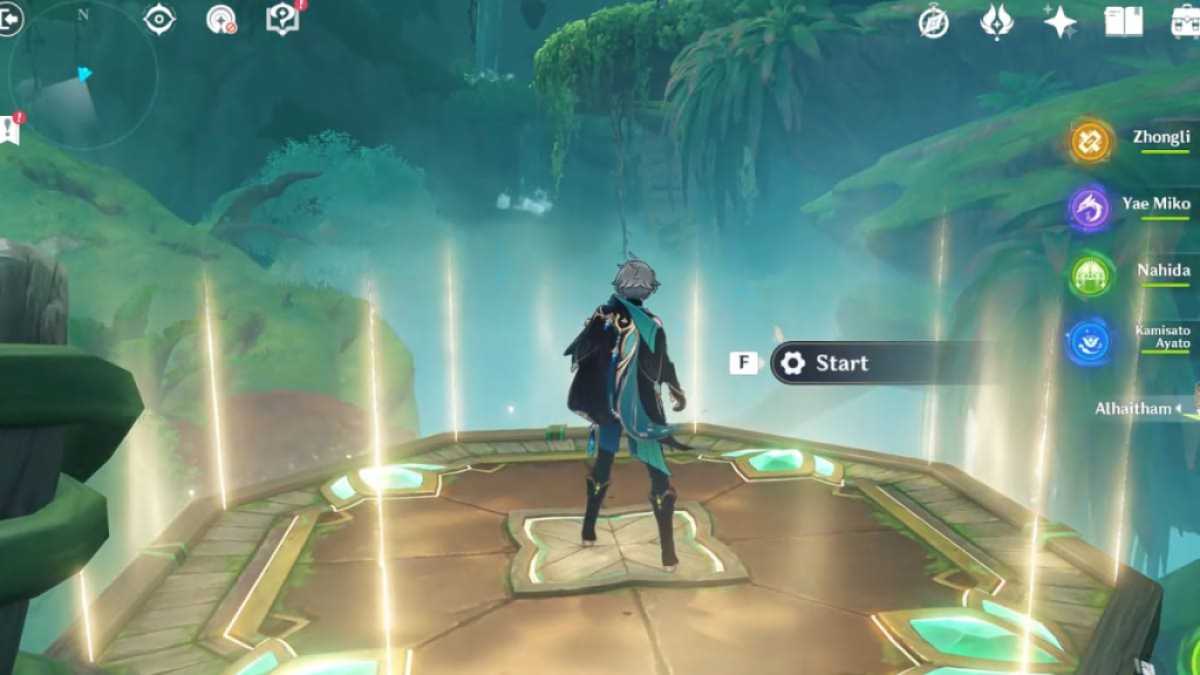 Interact with the platform to start moving. He will stop occasionally to prompt a dialogue, but will simply interact with him again to keep moving forward. Once at your destination (with a house in front of you), take a few steps forward to play another fragment of Ilyas’ memory. 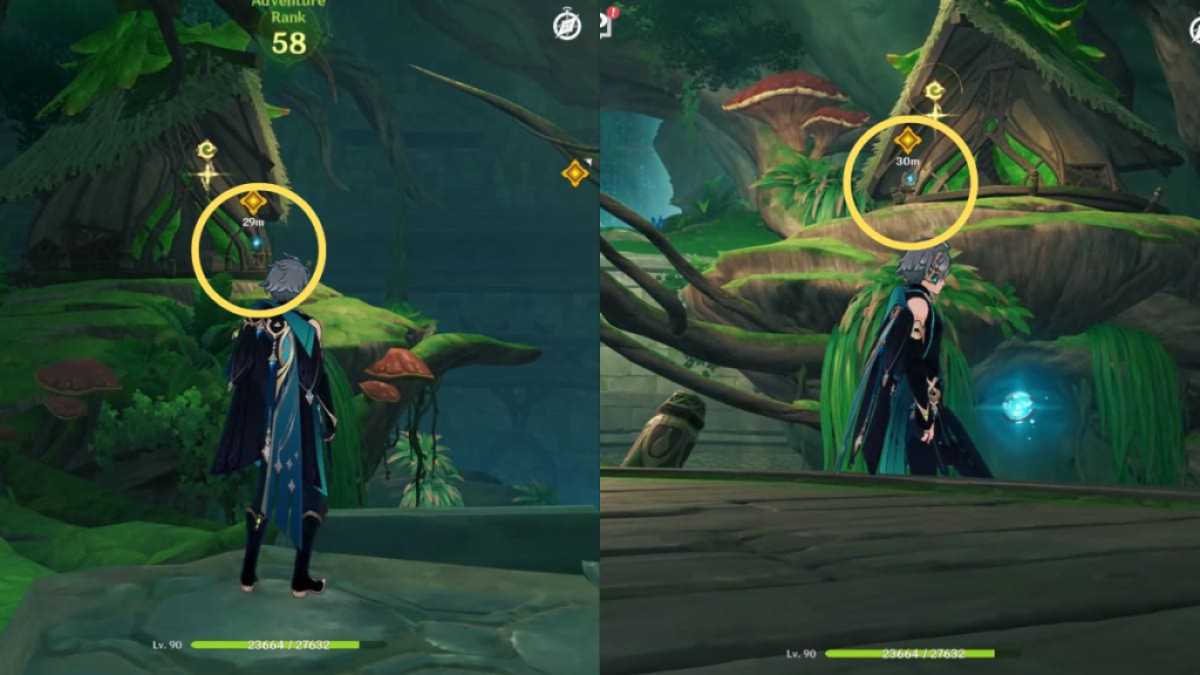 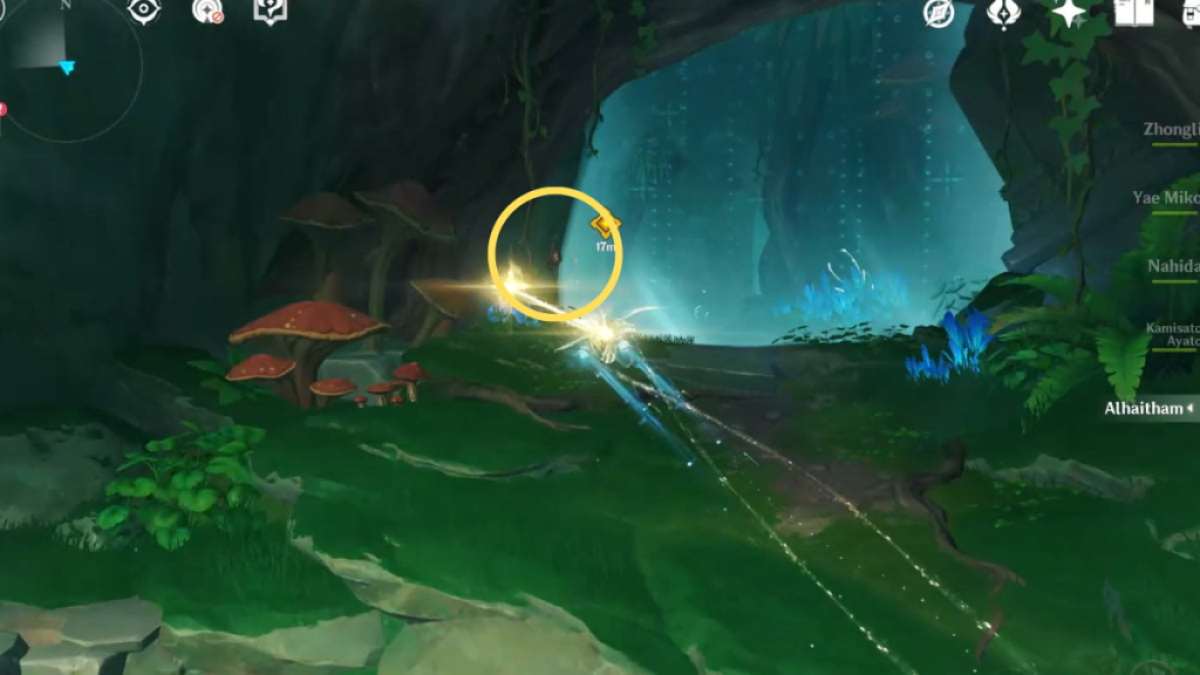 Hang on to the four-leaf seal near the barrier, where you’ll find the first lock on the left. Place the key in the lock to disperse the barrier. You still have a key with you at this point. 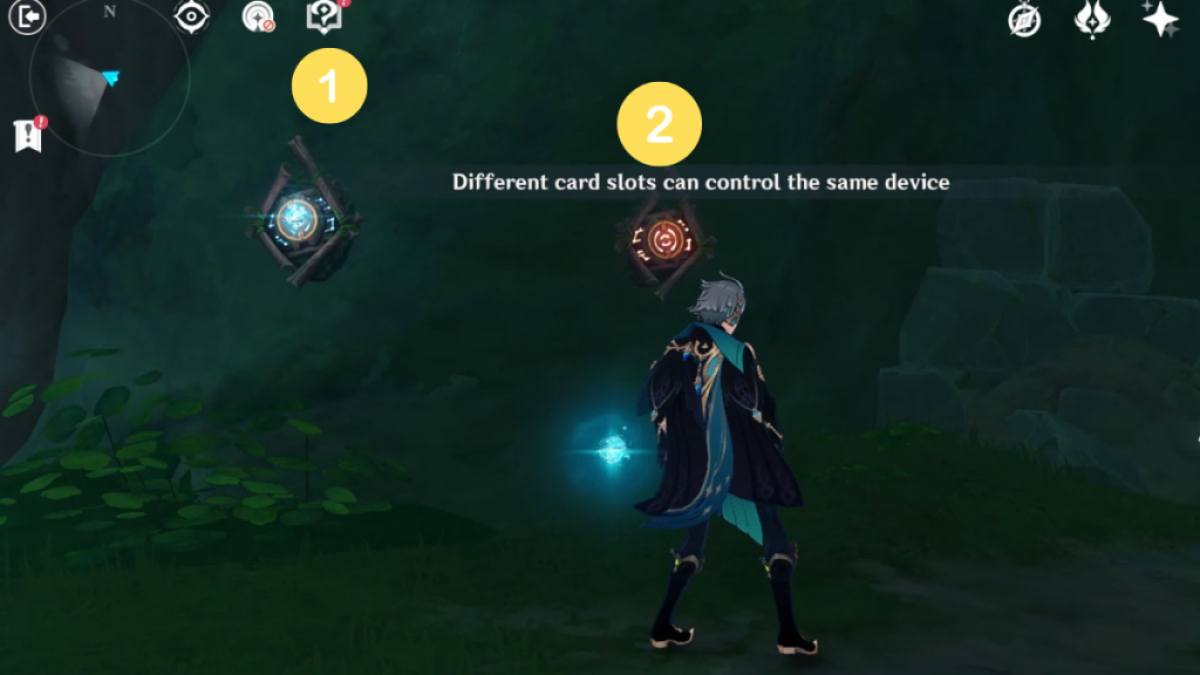 Then you need to follow these steps in the exact order:

Following these steps will cause the barrier to reform, but you will be inside and able to continue. You should also have two keys around you again, as they are needed to disperse the barriers ahead. 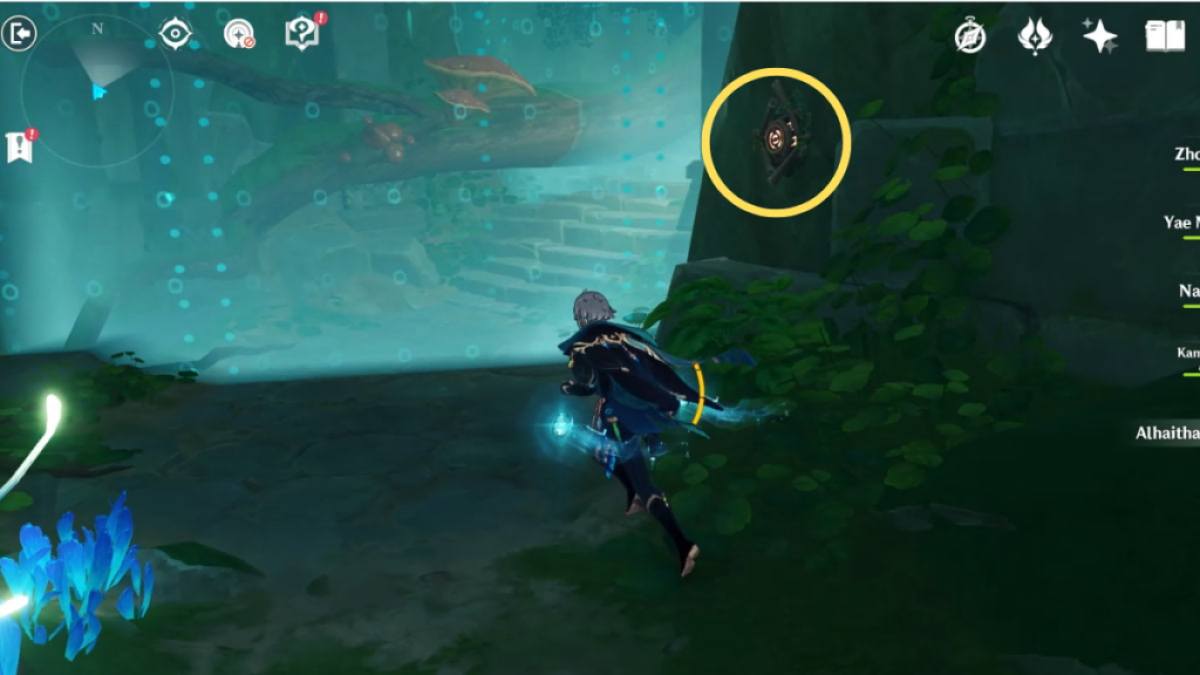 Continue deeper into the cave. Place a key in the lock to disperse the barrier. Then go up the steps and place the second key on the second lock to scatter another barrier. Keep moving forward to trigger another Ilyas Memory Fragment.

Once done, follow the quest marker to the clearing where Ilyas is waiting for you. You will engage in a long dialogue between him, Alhaitham and Siraj. 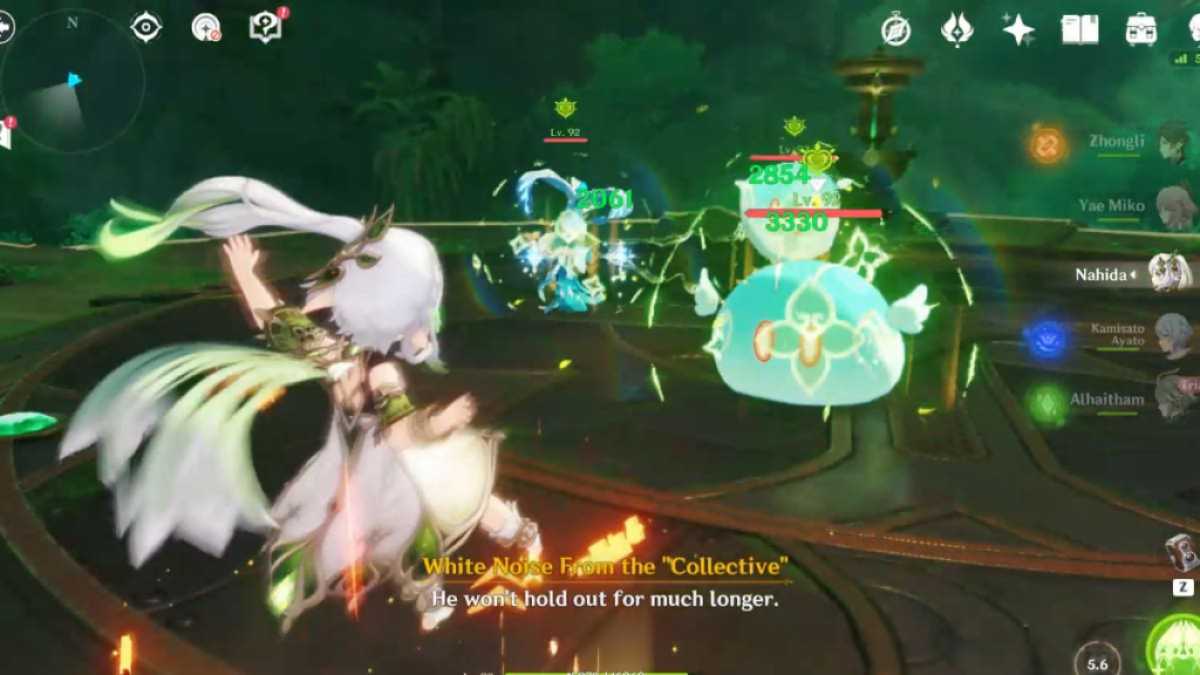 This segment is straightforward. Siraj will summon a few waves of enemies, mostly Slimes, Mushrooms, and a weaker Jadeplume Terrorshroom. Simply defeat them all to continue. Don’t forget that you can use Alhaitham as a trial character. After the battle is over, a lengthy dialogue and cinematic cutscene will ensue. Complete them all to also complete the domain. Don’t forget to search the valuable chest before exiting.

You will be able to continue the Alhaitham story quest. As a bonus, don’t forget to enter the library in his house after completing the quest to find the additional dialogue between Alhaitham and Kaveh.